I've been sewing a lot lately...which means I've been neglecting some of my other craft loves! So yesterday, while out shopping I picked up some jewelry supplies and beads. For a review on the new Hobby Lobby that just opened up...it was definitely a let down. I guess I just had higher expectations--maybe it was because I went on a Saturday and it was pretty crowded...or the fact that the prices were a little higher than expected...or that they didn't have much of a selection in the areas I was shopping in...and it was A LOT of home decor. There is nothing wrong with this, other than the fact that I would rather MAKE those home decor items, rather than pay $20+ for certain items. They DID have a large selection of Christmas goodies (already!) so I'm sure I'll be there a lot during the holidays. Overall, I guess I will have to go again after they've been open a while and maybe during the week to give it a more fair review...we will see. I'm hoping for the best!

I spent the morning working on some birthday gifts. It seems that I have the longest list of gifts and To-Do's lately, so sometimes I have to find smaller projects for myself to work on and to keep me going! Since I was working on jewelry, I decided to pull up some simple necklace tutorials that I have had my eyes on.

The first one was an interchangeable ribbon necklace from Infarrantly Creative who got her inspiration from Anthropologie. The idea is really nifty!...A clear beaded necklace attached to a colored ribbon that can be switched out according to what outfit you're wearing for the day. Here is her version! 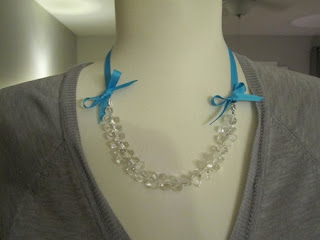 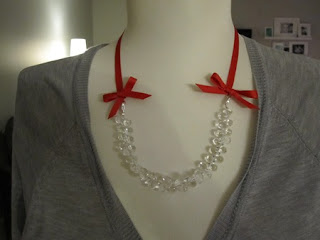 I wasn't too fond of the clear beads, so I went with the next best thing...pearls of course! :) Also, in the tutorial, it calls for lobster clasps on each end of the beaded strand to be able to change out the ribbon...instead of using clasps, I just used jump rings. I knew it would be just as effective but with less "supplies" being used (well for me anyway...I have way more jump rings than clasps!) I also opted to glue on my ribbon--they just seemed to sit prettier that way :) Here is my version! 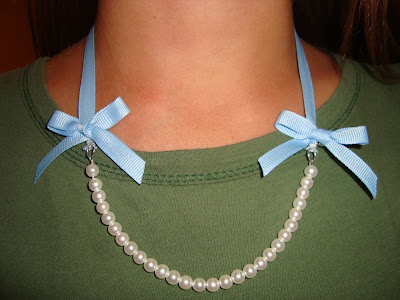 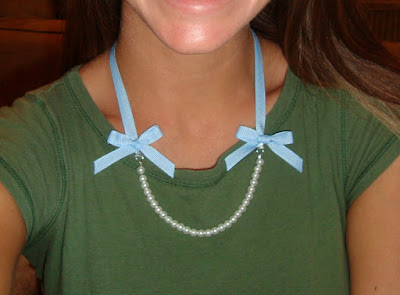 I LOVE how it turned out. I only have the blue ribbon for now...but I definitely plan to make PINK and every other color to go with any outift!
The second necklace I found on Adventures in Dressmaking--the Leather Bow Necklace. The post was actually a blog swap and was created by Alli at One Pearl Button. It is SO feminine, yet structured and classy at the same time. Here is her version! :) 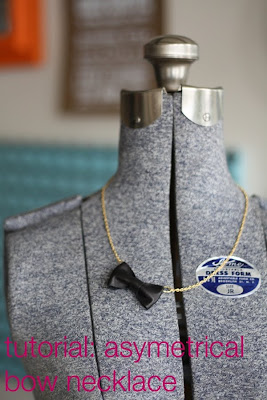 All it called for was scrap leather, a chain and hot glue! I opted to make mine with a silver chain instead of gold. I also knew that I didn't have any leather just laying around for the bow...so I used felt instead, which worked PERFECTLY! I used her tutorial exactly step by step, and it turned out wonderfully! 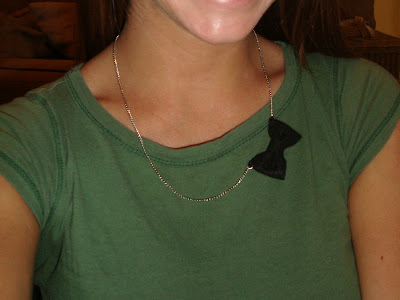 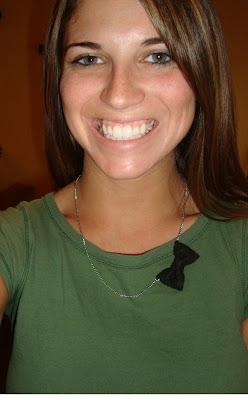 I definitely plan to make some with a gold chain, as well as different colored bows.
I think fabric flowers would be super cute to use as well!

Email ThisBlogThis!Share to TwitterShare to FacebookShare to Pinterest
What it's about: jewelry, ribbon, tutorial