Two of our very good friends got married this past weekend and I wanted to make something special for them--something handmade and personal. They're the same friends who Larry and I made this 'nap time door sign' for and I knew they would appreciate something handmade. I toyed around with a few different ideas; some of which I will probably do for Christmas, but ultimately decided upon a hand-painted canvas with a print of their wedding vows. A few days before the wedding, I barely got my hands on the entire script to their wedding ceremony (thanks to the bride's sister and wedding planner) which created a dilemma as to what part of the ceremony I would use. Larry and I ultimately decided on the 'blessing' script in place of using their vows. It describes a marriage beautifully and it's as if we are extending that blessing to them onward from past their ceremony and wedding day.


It was a tedious process, there were lots of changes and I encountered a few bumps in creating her along the way, but ultimately it turned out beautifully! 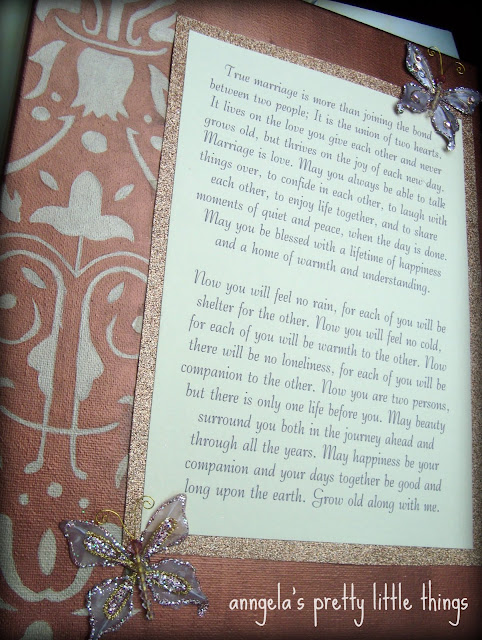 I started off sketching free-hand a simple damask print on the left side of the canvas. My original idea was to include their last name as well on the canvas but the blessing script we chose to use was a little larger than their vows so we didn't have enough room. 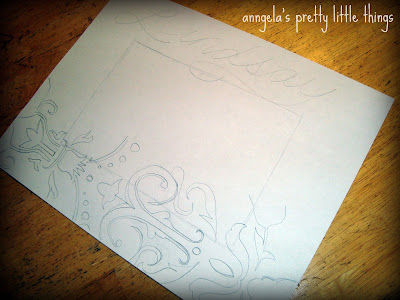 Multiple layers of paint when onto this canvas--at least two of the lighter gold for the damask print and two of the antique gold for the canvas surface. It took much time and patience, but it was worth the labor! 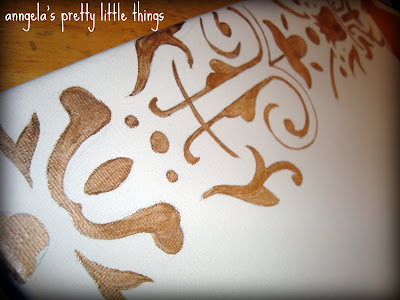 I printed the blessing script onto cardstock, adhered it to a specialty glitter paper and off-centered it to the damask print. I added two beautiful butterflies--something that is very meaningful and symbolic to the bride. 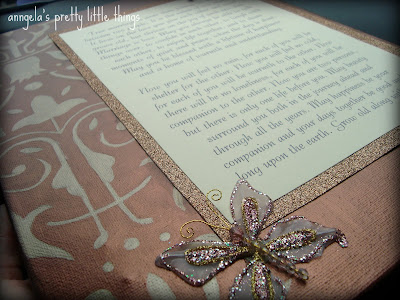 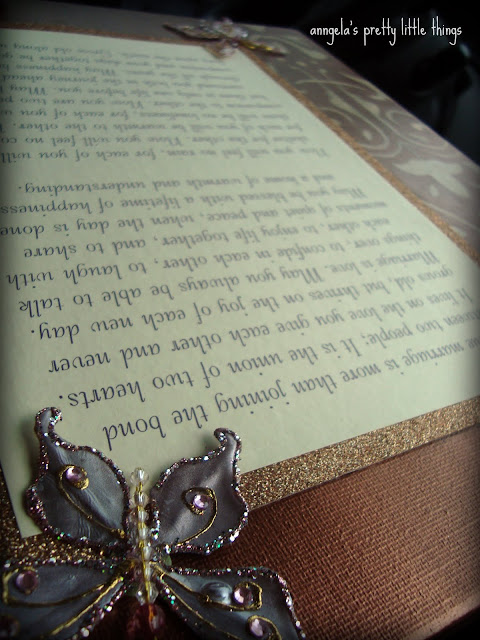 In addition to their canvas and a gift off their registry, I created two 'Newlyweds Night Out' Babysitting Passes. They have an adorable {almost} 2-year old and Larry and I thought they would like a few nights to themselves as newlyweds! :) 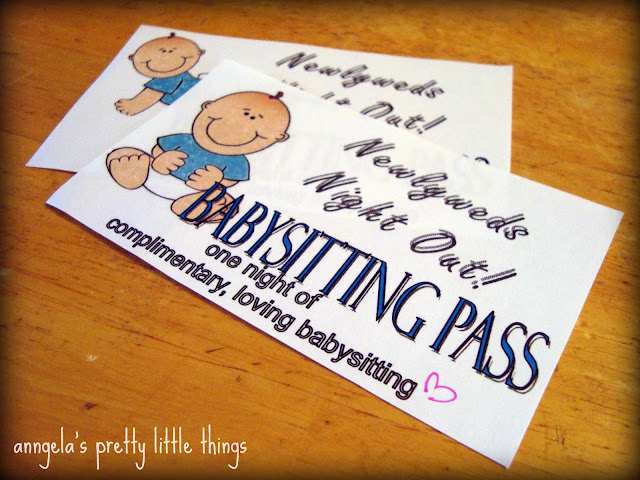 Their wedding took place in Pembroke Pines (right near Ft. Lauderdale, FL) at the Capriccio Ristorante-- it was such a beautiful venue, so intimate and ornate and everyone had such a great time!
﻿
﻿﻿
﻿ ﻿﻿
﻿﻿ 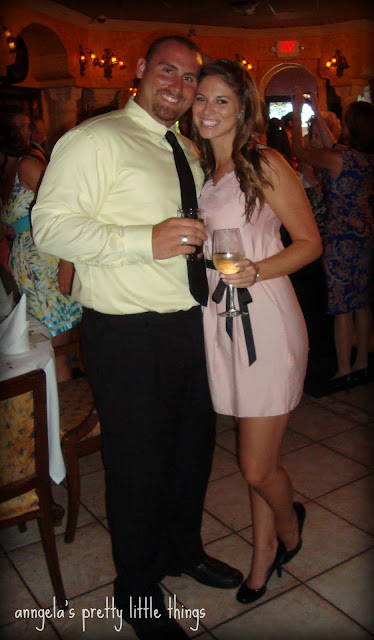 We wish all three of their family the best of everything for their future and hope they love their gifts!
We can't wait for them to return from their honeymoon in Jamaica!!
﻿
﻿

Email ThisBlogThis!Share to TwitterShare to FacebookShare to Pinterest
What it's about: DIY, gift, painting, paper, tutorial 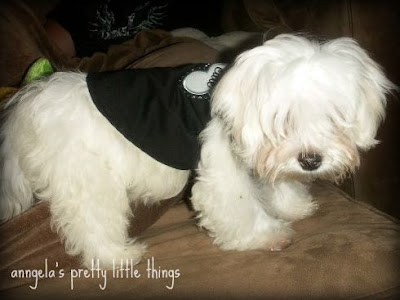 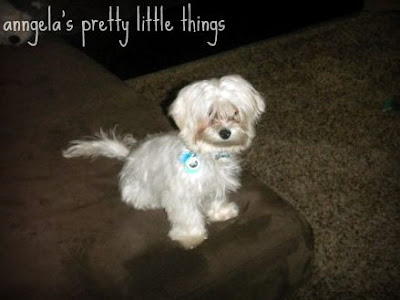 Starting off at a little over 5 pounds (at 4 months) and nothing but a Maltese furball, Bailey was the first puppy I ever had. I purchased him on November 28, 2007--yes, on Black Friday. The deal was; Larry gets a new flat screen TV and I get my puppy. I didn't think I would actually end up getting a dog (as we had just took the big leap and moved out on our own) but once I met Bailey I knew I had to have him--and the Black Friday price specials didn't hurt either. ;) After waiting about a week for him to finish getting his shots, our whole world was turned upside down once we finally brought him home. From potty training to kennel training he was one handful of a puppy! But getting Bailey was the best thing that I had ever done--he is so fun and so loving and brings us so much happiness every day! This year on Friday, July 29, 2011 he turned 4 years old. I can't believe my baby has grown up so fast! (I know--we talk like he is our child...but until we have REAL children, he is definitely our baby!)
Bailey is definitely a huge part of our family. :) 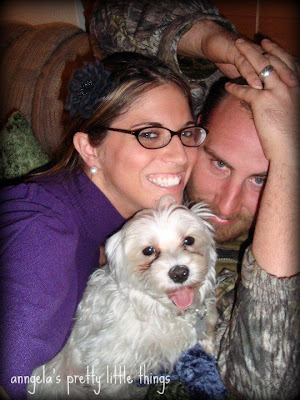 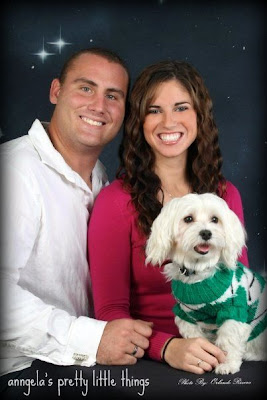 Thankfully he loves the pool just like his mommy. Well--he likes being on the raft anyway. :) 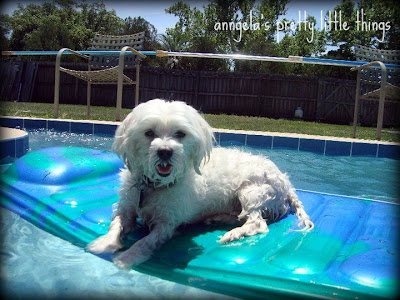 And you know this pup belongs in the sunshine state since he loves his boat rides! 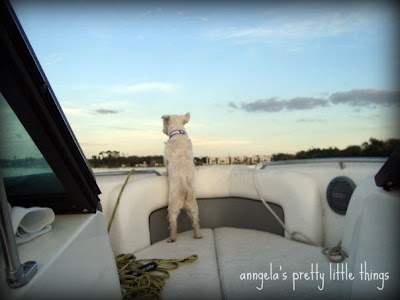 He's a little goofy at times... And likes to beg--a LOT. 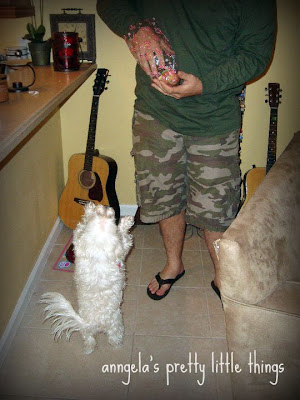 And even though he's a little 'not-worth-anything' dog, he gets plenty of love from everyone!
If I had a dollar for every time I heard "I don't like small dogs, but I love Bailey" then I'd be a millionaire.
I am truly grateful that Bailey is such a perfect pup!! 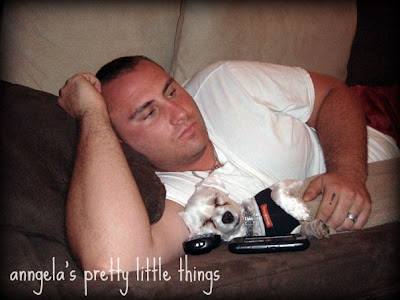 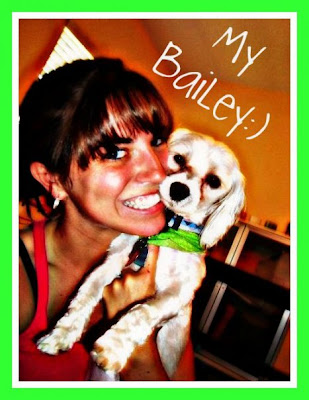 I think it's safe to say that thanks to the tremendous love from his grandma and grandpa (Larry's parents) Bailey has gained a little weight! At 4 months he was a mere 5 pounds but after 4 years he has grown into a whopping {almost} 14 pounds! And even though the vet just said it wouldn't hurt that for his age Bailey lose 2-3 pounds, I couldn't resist making him a yummy treat for his birthday! 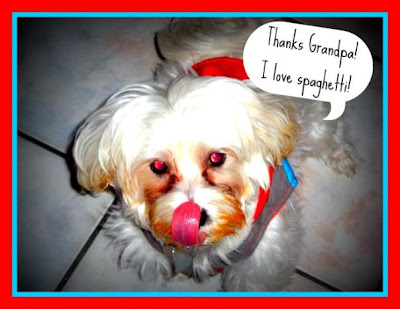 
Bailey loved this recipe and was nice enough to share his treat with his best friend, Harley! (Larry's parents' pit bull) Along with his cupcakes and a few treats from the pet store Bailey also got a few new toys since keeping his stuffed animals in one piece is pretty hard to do with a pit bull in the house!! :)
﻿ 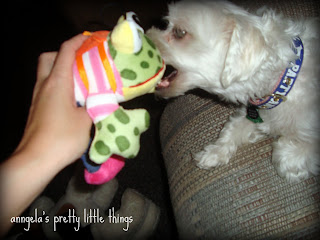 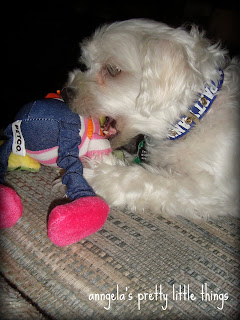 Bailey loved his new toy frog! I also found a blue star that reminded me of one of his first toys that he LOVED--needless to say he was anxious to get ahold of it!
﻿﻿﻿﻿﻿﻿﻿﻿﻿﻿﻿﻿ 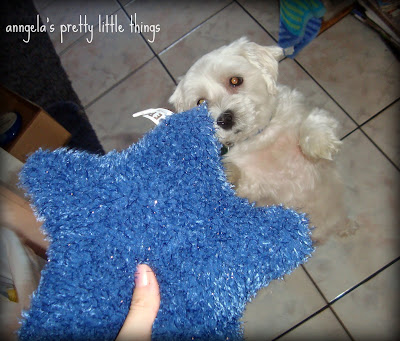 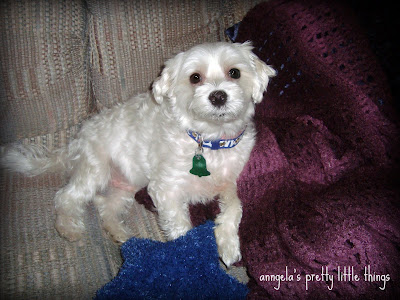 
This was sent to me on Bailey's birthday--what perfect timing!
If you want someone who will eat whatever you put in front of him and never say it's not quite as good as his mother's...
Then adopt a dog.

If you want someone who is content to get on your bed just to warm your feet and whom you can push off if he snores...
Then adopt a dog.
If you want someone who never criticizes what you do, doesn't care if you are pretty or ugly, fat or thin, young or old, who acts as if every word you say is especially worthy of listening to, and loves you unconditionally, perpetually...

Then adopt a dog.
I can't imagine what my life would be like without being able to spoil Bailey or come home to the love of my pup every day!!